Almost a year after I blogged about my fourth birthday of my old camera, I bought a new one: a Canon 350D.

What a nice camera it is! The difference between a compact camera and a SLR is huge. The speed, the non existing shutter lag, the control, the range of the lens (ok, this is more a comparison of the lens and a compact camera), the feel, the … everything. 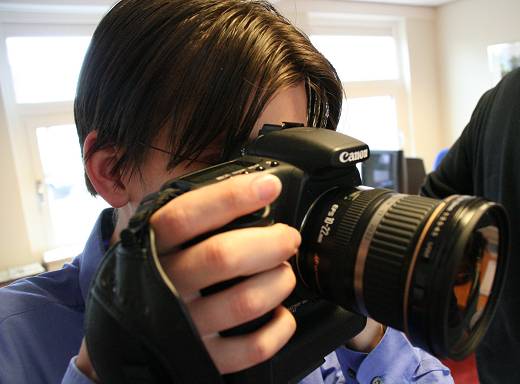 Together with the camera I bought the Sigma 18-125mm and a Canon 50mm f/1.8. The Sigma as a holiday walk-around lens (relatively cheap, relatively sharp, relatively light, large zoom range) and the Canon as a low-cost, but high performance portrait lens. Now, I have the camera and the lenses for about two weeks, and I’m quite pleased with both. To start with the Canon: the built is, well, ok (it looks cheap, plastic bajonet, weights almost nothing), but the results are very good. The Sigma’s main advantage is that the zoom range is very large, and the quality of the pictures is quite ok. Because of the large zoom range this lens is almost always attached to the body.

The autofocus though is something I have to get used to. When you have a digital compact camera the small distance between the lens and the CCD gives you an enormous depth-of-field. To put is simply: focussing is not really an issue: everything in the image is sharp. With a dSLR things are different: the DOF is a lot smaller (this is seen as one of the main advantages of a dSLR over a compact camera, because when properly used, a small DOF can give you nice images), so focussing is a lot more important. With both lenses I have ‘problems’ with focussing. With the 50mm at 1.8 the DOF is so small, you really need to make sure that you’re focussing at the right spot, and in many ocassions I find myself focussing at the wrong spot. With the Sigma, I found the focussing quite slow. It can take up to 1.5 seconds to find a lock. I wasn’t expecting that (my Fuji 2400 was a lot quicker than that). But Martijn said that that was an ok performance and that I wasn’t comparing the lenses fairly (the Fuji lens is a lot lighter to move, and needs to travel a much shorter distance and less precisely), and I think he is right. I never had any problems with the time-to-focus though.