Last week I bought a new subscription for my mobile phone. Apparently, even when you call very infrequent it is cheaper to get a subscription instead of using pre-paid cards. So I switched from my T-Mobile pre-paid card (calling costs .33 euro/minute) to a Telfort subscription (90 minutes/month for 3.28 euro).

To be able to still be available at my old phonenumber I thought it was a good idea to dig up my old phone and place my pre-paid card in it. While I was doing that (which miserably failed because I couldn’t find the charger anymore, and besides, I remembered afterwards that it was still KPN simlocked), I browsed the Internet a bit to find some info about the phone. 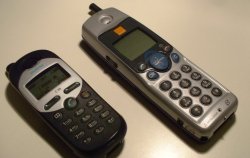 The old Mitsubishi phone next to my ‘new’ Siemens C35i

When I brought the phone I was under the impression that it was the MT-D30. It was advertised as such, and the manual speaks about that. That text can also be found inside the phone. I was very surprised that all the photos of the MT-D30 I came across were completely different. It appears that my phone is not the MT-D30, but the MT401.

BTW: The phone is branded by Orange, which is one of the competitors of KPN, the company I brought this phone from. At that moment Orange wasn’t active at the Dutch market, but even then: I find it very weard that a company sells goods with advertisement on it for a competitor…